At Spanish Schoolhouse, students not only learn the Spanish language, but also experience the warm culture and traditions of the Latin community.  Here are a few of the Latin Christmas traditions they learn about.

Did you know that, on December 7, Colombia celebrates Dia de las Velitas (Day of the Little Candles)?    On Dia de las Velitas, people place candles and luminaries all along the streets, outside their homes and in their windows. It’s quite a beautiful and tranquil sight to see all of the twinkling lights around every neighborhood.  The holiday celebrates the eve of the Immaculate Conception and also marks the unofficial start of the Christmas season in Colombia.  In true Colombian style, neighbors, family and friends gather to celebrate together, enjoying food and drink on the street with one another to mark the start of the long Christmas season.

Las Posadas is a nine-day celebration with origins in Spain, now celebrated in Mexico and Latin America, beginning December 16 and ending December 24.  Posada means lodging or accommodation, and the celebration is a re-enactment of the search of Mary and Joseph for shelter in Bethlehem.

Processions pass through the streets, stopping at houses to ask for lodging.  The head of the procession will have a candle inside a paper lampshade. At each house, the resident responds by singing a song until Mary and Joseph are finally recognized and allowed to enter. Once the “innkeepers” let them in, the group of guests come into the home and kneel around the Nativity scene to pray.  Latin American countries have continued to celebrate this holiday to this day, with very few changes to the tradition. In some places, the final location may be a church instead of a home.

Individuals may actually play the various parts of Mary (María) and Joseph with the expectant mother riding a real donkey (burro), with attendants such as angels and shepherds acquired along the way, or the pilgrims may carry images of the holy personages instead. Children may carry poinsettias or candles. The procession will be followed by musicians, with the entire procession singing posadas such as pedir posada. At the end of each night’s journey, there will be Christmas carols (villancicos), children will break open star-shaped piñatas to obtain candy and fruit hidden inside, and there will be a feast.  On Christmas Eve, the figure of the Christ Child is added to the Nativity scene at the last of the nine houses.  This begins the biggest party of all!  Gifts are left under the tree on Christmas morning by the Christ Child for the children.  Parents and adults do not exchange gifts until New Year’s Day.  Midnight Mass on Christmas Eve follows the posadas, and is in turn typically followed by a full supper.

Hispanic  holiday celebrations continue on to the new year with Día de Reyes on January 6th, or Three Kings Day. The Western idea of Santa Claus has gained popularity among Latin America, but traditionally gifts are exchanged on Díade Reyes, not Christmas. The tradition is based on the biblical story of the Magi visiting Jesus after his birth and bearing gifts. Instead of leaving milk and cookies for old Saint Nick, kids will leave hay or dry grass for the Wise Men’s camels to eat.

Like all festivities in Latin America, Día de Reyes has its culinary traditions. Rosca de reyes, is a round pastry decorated with candied fruit, figs and cherries. In Mexico, family and friends gather to eat the rosca, which is baked with a plastic, baby figurine inside. The tradition is whoever finds the figurine in their slice of pasty has to make tamales and host a get together. 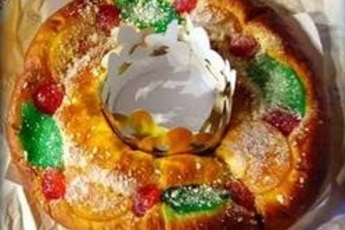